Unterföhring near Munich, January 12, 2016.  The IFOY organisation has announced the nominations for the IFOY Award 2016. 13 trucks and solutions from BYD, Crown, Jungheinrich, SSI Schäfer, Still and Toyota Material Handling have been chosen for the final round from all the entries.

"All in all, 16 companies submitted entries this year and put forward an extremely wide range of products for the award. These 13 vehicles and solutions are the best of the best in terms of innovation", says Anita Würmser, Chairperson of the IFOY Jury.

The jury has nominated a total of three vehicles in the "Counter Balanced Truck" category, and a truck made in China has made it into the final round for the first time in the history of IFOY. The 3-wheeled ECB18C electric forklift truck from BYD with a load capacity of 1.8 tons was launched in December 2015 and is powered by a maintenance-free iron-phosphate battery. There is no longer any need to change the battery, as the 80-volt threephase technology permits intermediate charging in just one hour and without memory effect.

A further nominee and test candidate is the four-wheel LPG counter-balanced truck Crown C-5 with a load capacity of three tons. The gas-powered forklift has been on the market since June 2015 and boasts an inhouse-developed 2.4 litre engine, a robust powertrain, separate cooling systems for engine and transmission, and the typical Crown comfort level modelled on concepts used in the automotive industry.

The third forklift nomination went to the Traigo 48 from Toyota Material Handling. The first truck with a 48-volt lithium ion battery was launched in October 2015. The all-rounder can lift 1.6 tons up to heights of 7.5 metres, and its new electronic power steering makes it extremely agile. It doesn't need a battery change and can be rapidly charged even in short breaks.

Nominations for Warehouse Trucks from Crown, Jungheinrich, Still and Toyota

The jury announced a total of five nominations for warehouse trucks – three in the "highlifters" and two in the "lowlifters" category.

Jungheinrich made it into the final round of the intralogistics "Oscars" with the totally newly developed EKX 516 electric order picker/forklift truck. Lightweight design with vibration damping, the latest synchronous motor technology and top performance parameters mean that the man-up narrow aisle stacker sets a new benchmark: it can lift 1.6 tons to a height of 17.5 metres, has a top lifting speed of 0.6 m/s and has 30 percent higher driving speeds. In addition, the manufacturer promises savings of 7,000 euros a year with its 2Shift1Charge guarantee.

Rival Still has earned a further nomination with the highlifter truck EXV-SF16i. It has a top speed of 10 kmh, can be used in both pedestrian and onboard mode, and achieves a 25 percent higher transshipment performance than its predecessor, the EGV-S. The pneumatically cushioned operator platform with height-adjustable sidebars and the patented load capacity indicator are new. The machine also automatically adapts its travel speed in curves and depending on lifting height. One interesting feature is the language-neutral colour display showing operator information and warnings.

Nomination number three goes to the BT Staxio SPE 140L from Toyota Material Handling. The compact and extremely agile electric highlifter with platform and initial lift feature reaches speeds of up to 10 kmh and lifting heights of up to 5.40 metres, with series-produced trucks achieving heights of up to six metres. An automatic speed reduction feature for cornering provides protection for the driver. The use of lithium-ion battery technology means battery changes are a thing of the past.

In the "Warehouse Trucks, lowlifters" category, the jury has announced nominations for Crown and Jungheinrich.

The Crown RT 4020 forklift truck with driver platform launched as recently as October 2015 can lift two tons and is the newest Crown product in this category for years. It has a top speed of 12.5 kmh, and the chassis width of just 780 mm means it can easily manoeuvre in tight spaces, as is the case when loading and unloading trucks, for example.

There is also a nomination for the optimised Jungheinrich EZS 5100 tugger train solution with GTE trailers launched in February of last year. The EZS 5100 has a traction capacity of ten tons, making it a high-performance tugger train for the full range of applications. The electrohydraulic auto-lift feature of the GTE 312 trailer lifts loads cleanly and rapidly, and ensures that each trailer can be controlled individually.

The first nomination in the new IFOY category goes to the Jungheinrich EJQ 325. The Deutsche Bahn rail company in Dortmund presented the Jungheinrich special design team with a major challenge: the development and realisation of a device for changing the IC/ICE wheel sets. The task definition included precision load pickup and individual loading of the ICE wheel sets as well as the wheel set changer each weighing 2.5 tons over a lifting height of 550 millimetres. The biggest challenge was longitudinal and traverse travel with a 2.4 metre long load in a work aisle with a width of just 2.9 metres.

A further nomination is for Still's horizontal order picker CX-S 16. The series-produced vehicle is additionally equipped with a vacuum pump, a crane boom and a tube lifter from Schmalz so that it can move loads with weights of up to 40 kg. A scissor-lift mechanism lifts two pallets to an ergonomic height of up to 785 mm. Using the suction tool, the operator can easily pick, transload or palletise bulky products or heavy items like boxes, sacks, buckets, drums or small load carriers at any location.

Three system solutions from Crown, SSI Schäfer and Still are vying for the title of "Intralogistics Solution 2016"

This year, concepts from Crown, SSI Schäfer and Still made in into the final round for intralogistics system solutions.

Crown joins the race with a quick-pick remote solution for Jumbo Supermarkten, the leading private supermarket chain in the Netherlands with over 580 locations. At the Veghel distribution centre, around 1.4 million non-perishable foods are picked and sent to 171 Jumbo locations every week. The market for fast-moving consumer goods is fiercely competitive, and delivery punctuality depends on smooth routines in the Jumbo order picking and distribution chain. Tests had already shown that driverless transport systems generated inadequate efficiency gains. In response to this finding, Crown designed a semi-automatic solution based on GPC 3000 order pickers and the QuickPick® remote system (a past IFOY winner). Each Crown GPC 3000 transports four roller containers. With the help of a colour coding system, the order pickers simultaneously put together articles for multiple locations. In addition, the order picking process was partly redesigned. As a result, Jumbo has made a 7.5 percent gain in productivity while considerably reducing the burden on staff. The conversion of the next Jumbo distribution centre in Elst is already underway.

SSI Schäfer wins a nomination for the inhouse-developed fleet solution with Weasel® driverless transport systems implemented at the NextLevel Logistik GmbH company in Eltmann near Schweinfurt. Be it containers, cartons, trays or other products of widely varying sizes up to 35 kg – at NextLevel Logistik, Weasel is responsible for all transport tasks between incoming goods, the workplaces, goods dispatch, all the way through to waste disposal. The fashion logistics service provider active in the fast-growing eCommerce segment now has at its disposal an in-plant transport system that – unlike conventional driverless transport systems – does not need any costly sensor technology or complex control systems. The complete hardware and software for the system was installed and went into operation within the space of just three days. One special characteristic of the solution is the automatic RFID group reading system at the goods receipt stage. A further major advantage from the point of view of NextLevel Logistik is the flexibility and easy scalability of the solution: Weasel is not rail-based and can therefore be flexibly integrated in existing infrastructures. The solution can grow together with the business volume, and seasonal performance peaks can easily be handled by using additional Weasels.

Still: With around 430 million packages stored every year, the storage capacity at the Miehlen logistics centre of the Heuchemer Verpackung GmbH & Co. KG company had reached the limit. In the new extension building, Hamburg-based intralogistics specialist Still installed a new space-optimised 18 metre-high channel storage system with four pallet shuttles and two order picking stackers of the type MX-X in the high-bay warehouse and optimised the interplay of the two logistics centres. External storage facilities were closed down and the entire logistics centralised in Miehlen. The IFOY Award-winning iGoEasy system, a combination of automated highlifter truck of the type EGV-S and an iPad as configuration and control unit were used for the flexible organisation of constantly recurring transport runs for production waste disposal and the provision of buffer supplies. As a system integrator, Still not only planned and installed the entire system but also handled the fine tuning between shuttle, racks, conveying technology, stackers and driverless transport systems. One innovative feature is that the shuttles are equipped with sensors to detect overhangs, thereby minimising the space between goods consignments to ensure that optimum use is made of the valuable storage place in the rack channels. This has increased the storage density for the pallets with overhangs by up to 50 percent.

Which trucks are ultimately chosen for the IFOY Award 2016 will depend in large measure on the results of the IFOY Test and IFOY Innovation Check, which all nominated trucks have to undergo over a period of one week on the grounds of the official logistics partner CeMAT in Hannover. The IFOY Test measures the hard data and compares it with the data for rival machines. The IFOY Innovation Check prepared by the specialists from the Dortmund-based Fraunhofer Institute for Material Flow and Logistics (IML) as well as the Chair of Machine Elements and Technical Logistics at the Helmut Schmidt University in Hamburg, focuses solely on innovations and the degree of innovation relative to the market. In addition, the jury members drive all nominated vehicles themselves, putting them through their paces during the IFOY Test Week.

The winner in each category will be chosen by a jury made up of 25 internationally reputed trade journalists and the leading logistics media from 16 countries around the globe. The IFOY Award will be presented on May 31 at the CeMAT opening ceremony in Hannover.

IFOY AWARD
2016 nominations at a glance 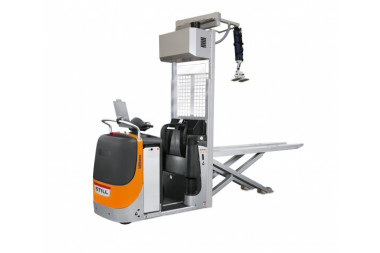 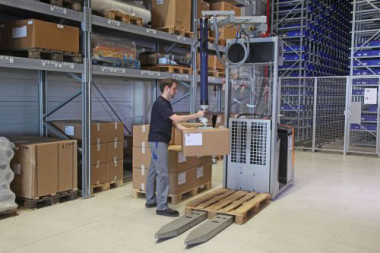 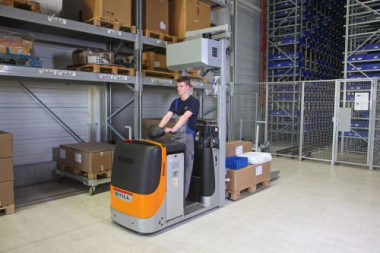 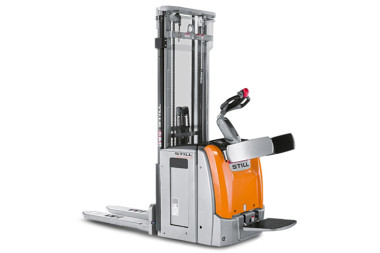 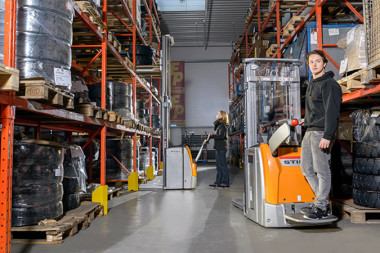 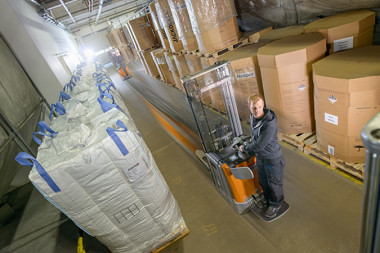 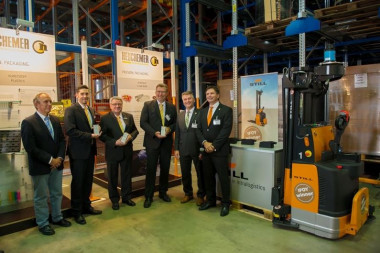